I was recently talking to a previous colleague about the pain that is involved in adding System Users into Snow License Manager in batch. Unfortunately, there is no officially supported way of doing this by Snow Software, so you need to add in each user one-by-one which when you start getting into the double or even triple digit user requests, it can take an annoyingly long time to create them all, choose a password, you get me.

Something I’ve wanted to create for a while is a System User Importer, I learned a lot about how System User Creation works when I created my Snow System User Migrator including a lot of things that I didn’t need to know - at the time. I spent some time this evening having a play around and I’ve managed to find the library and classes that are used for creating the hashed passwords for System Users in Snow License Manager, which means in theory, I can finally create the System User Importer I’ve wanted to create for a good 4 years now. Knowing my luck though, it’s probably something Snow will add in the next 6 months, like what happened with my Inventory Snowpack Extractor I created. 😅😅

Until I start work on that though, I had to get a feel of how the hashing system worked and created what is essentially a Password Reset tool for Snow License Manager, which is pretty pointless considering you can just click Forgot Password, but hey, least I know how it works now and can use it in dev environments that don’t have SMTP access. 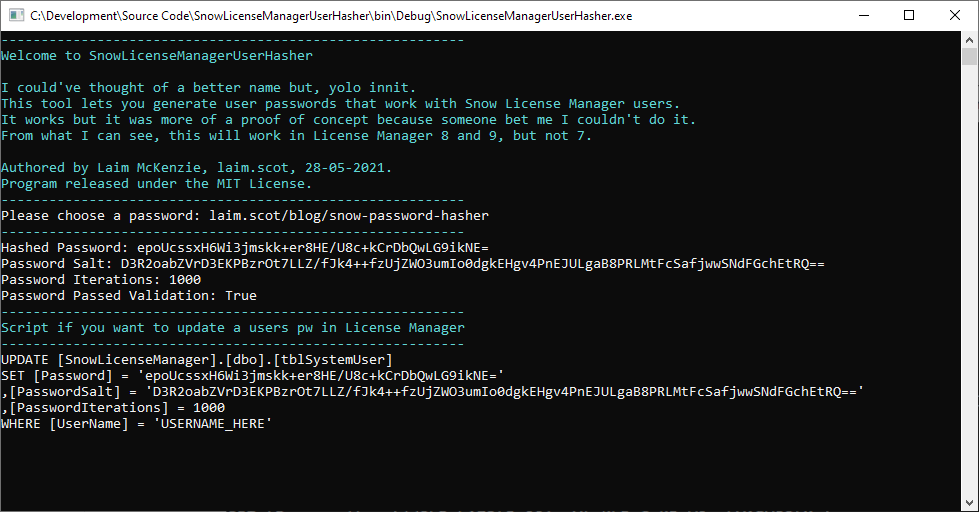 It relies on a specific library used by the Snow Management and Configuration Center, but for security reasons I’m not going to provide the name of it publicly, and I won’t be releasing this tool either as it’s merely a proof-of-concept.

Music obsession at the moment: Nickelodeon - Yxngxr1 - this was an obsession in 2019 as well, good times.