I’m hoping this is the last migrator tool I need to create, but I very much doubt that is going to be the case since Snow doesn’t have an official migrator toolset, but alas.

In April I posted about my Snow Document Migrator that allows me to migrate Snow Documents (License, Computer, User documents etc) from one platform to another.

During the import of licenses and agreements, we found that it is not possible to import legacy Agreement Periods, so if you have the following:

The only one you can actually import is 03-01-2006 - 03-01-2021, which for some people might not be an issue, but as you’ll likely want to have all of your information in Snow under your agreements and/or Licenses, it’s a bit weird that there is no mechanism to Import all agreement periods per an agreement, but it is what it is… kind of.

Similar to my last migrator tools, why move things manually? This one truthfully isn’t as impressive as the others, but it does resolve the issue in hand.

It works by reading the existing data from the Old Platform and compares it to the data in the New Platform, if the specific Agreement Period doesn’t exist it gets added in, if it does exist, it gets skipped to prevent Duplicate Node errors and potential overlaps (hopefully)

The tool looks near enough identical to my others, lazy or reusing code? Who knows, but the design is nice enough that it makes sense. 😃 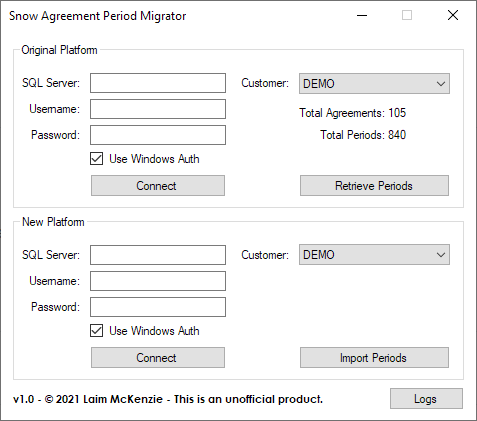 There are a few prerequisites, similar to my other migrators, for this to work.

Before migrating over the periods, you must first migrate over the agreement with the exact same Agreement Number (not the Snow defined Contract ID, but the Agreement Number field). Once that’s done, open the tool, connect to both platforms and click Import.

I’ve not fully tested this yet, but from the basic testing I’ve completed it does definitely work (good start) and it saves a lot of time, managed to migrate over 800 agreement periods in less than 5 minutes.

The big benefit of this is now Softcat, my employer, can migrate the agreement periods over during customer migrations without having to import the agreements and then edit each one manually to get the legacy periods in there.

At the moment all of these migrators work by connecting two platforms together for a period of time, but I am working on updating them to allow data to be fed in via Spreadsheets, which should hopefully mean we can use the same process for migrating on-premise platforms to dedicated or shared platforms.